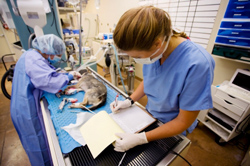 People will often refer to sterilising an animal or alternatively called spaying or neutering of a pet as a “snip-snip”. This makes it sound like it is a quick, outpatient procedure, which only takes a few minutes and only cost a few rand. Nothing could be further away from the truth. Spaying or neutering pets is a full blown surgical operation which requires a general anaesthetic.

Prior to surgery, all patients receive a pre-anesthetic physical examination. Potential anesthetic risks are assessed and potential problems may be discussed with the pet owner at the time of admission or will result in a phone call to the pet owner where it will be discussed. In most cases the animal is required to be admitted early in the morning to have the surgery performed later in the day. In many cases the vet may not be seen at the time of admission to the veterinary practice but should the vet pick up any potential anaesthetics risks during the consultation and full examination, which is performed before the operation, the owner will be contacted.

The procedures are performed under “general anaesthesia”. The pet sleeps painlessly through the entire surgical procedure. Anaesthesia choices used in our hospital are the same as those used in humans undergoing major surgery. Newer inhalant anaesthetic choices like isofluorane are reported to be ten times safer in older pets than other choices like intravenous anasasthesia only which were previously used in veterinary clinics and practices.

Surgery is performed in an operating theater equipped with oxygen and ventilation equipment. All surgery is done using sterile gloves and surgical instruments. In female animals the abdominal cavity is entered during the procedure so sterility of the environment and the surgeons and their assistants are vitally important. During the operation the vet has to tie off several blood vessels and structures, which obviously carries the risk of an animal bleeding after the surgery should something go wrong. We are committed to quality and therefore maintain high standards for sterility, anaeasthesia and surgical procedures. After surgery, veterinary support staff carefully monitors each patient until fully awake and stable.

So what happens at the time of surgery in female animals? In female animals the proper term and procedure for this operation is an ovariohysterectomy. During this operation both the ovaries and the uterus are removed. This operation required the surgeon to make an incision through the abdominal wall and go right into it to access the ovaries, which sit very close to the kidneys and the uterus which also connects up with the bladder at its lower point. The ovaries are the organs where “eggs” or ova are produced which, during mating, meets up with the male’s sperm to cause an animal to “fall pregnant” and for a new baby to be formed. The uterus is the “home” of the baby animal during pregnancy. If the uterus was removed on its own so the animal can’t carry any more babies, the ovaries would have been left behind which would still cause the body to produce “eggs”. This process causes major hormonal changes in the dog’s or cat’s body which lead to the signs of “being on heat”. A female dog or cat which is on heat, attracts male animals of the same species, sometimes even from miles away. Cats, and more so dogs, have a very acute sense of smell and can smell the female animal on heat, even from kilometers away. This may lead to “unwanted visitors” to your property and in cats especially, will cause male cats to fight – which could potentially lead to infections, abscesses and even feline AIDS. If you sterilise your pet, you will save them and yourself a lot of anxiety and aggravation. Further to this, the incidences of mammary cancer or potentially lethal uterus infections are dramatically reduced by spaying a queen or bitch at a young age (the younger the better but preferably before two and a half years of age). By far the biggest advantage of having your female animal spayed is the prevention of unwanted pregnancies and having unwanted puppies or kittens brought into this world.

In male animals the proper term and procedure to sterilise a male animal is castration, which is the surgical removal of both testicles. The testicles are removed because they are the major source of male hormones, which cause aggression, sexual interest and urine marking of territory. Neutering your male pet provides significant advantage because most of the dominant male behavior “goes” when the castration has been done. A major advantage of having a dog castrated at a young age is that the incidence of prostate cancer and other prostate problems later on in life is significantly reduced.

No pet is dismissed from the hospital until the vet is satisfied that it has fully recovered from the surgery and anaeasthesia. Fortunately animals usually recover very well after this operation and very little care is required at home after hospital discharge. Pets usually go home the same day on which the surgery is performed. Sometimes your pet may shiver or be a bit groggy and disorientated after the operation so make sure they are in a safe warm environment when they get home.

The sutures which are used to tie off blood vessels and internal organ structures dissolve by themselves. Usually the sutures which are placed in the abdominal wall and skin do not dissolve and the skin sutures require removal within 10 – 14 days after the operation. This procedure is included in the initial fee.

So next time, you think of getting a pet and having it sterilised with a quick “snip-snip”, think again. It is not as simple as that. Because it is a once in a lifetime operation for your pet, with all the potential associated risk of general anaeasthesia and surgery, make sure you get it done right and get it done properly.